Restoration and Putting Feathers on a Singing Bird 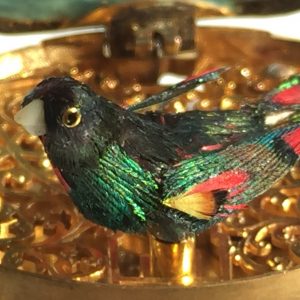 Thanks to the experience I have gained over the years in repairing and reconstructing singing bird boxes, and as I collected better feathers, I have perfected the process of replacing the plumage on automaton birds, making the results very realistic.

At first  I worked with bigger feathers that covered much of the tiny body of the bird (a little over 1 cm) but the result was not very natural. It was not till I discovered tiny feathers on the heads of various birds that I began to get more natural, realistic results. Even though only one big feather is needed to cover the body of a bird, tiny, delicate feathers, when they have had the down removed, are much more appropriate for a bird’s tiny body.

One of the most frequent problems in this type of work is that the bottom beak breaks off.

This beak is articulated and has a 0.2 mm drill hole for the pin that holds it on and on which it rotates. I use molars that have been extracted at a dental clinic and a small serrate tungsten carbide disc to cut off a little piece and shape the beak.

It is very rare to close up the bird and have everything work the first time round, so that you have to take great care with the pins that go through the body so that they don’t interfere with the mechanism. The tiny mechanism is responsible for moving the head, among other things, and it is the most complex system to be made inside the bird. It is not only complicated to make the part but also to put it back if it moves out of position. It’s quite a challenge, as the part are very thin and delicate, and there is so little space for getting them into the correct place with so many complex movements.

The rotation is produced by a little hollow lever on the only pinion inside the bird, which is connected to the head at the top. It crosses the central shaft in the head where the pinion fits between its teeth. When the lever is pressed and moves up, it turns on its axis and pulls the head, making the head turn to one side and the beak open. The movement of the tail is done with a spring lever that connects to the gear lever and its pin. When it is raised it moves the beak and tail , separately from the turning movement.

Also, although the singing bird’s wings move separately from the rest of the movements, they move together, in sync. The wings are held by a tiny hinge with a cam and a hook for the return spring. When the pin is activated and travels upwards, it moves a lever that hits the cam of the hinge and lifts it. The wings’ return spring is responsible for moving them back into the closed (folded) position when the needle is no longer being pushed.

The bird has three pins inside that are set one inside the other. They activate the movements separately: the thinnest one on the inside turns the head, the second one in the middle activates the wings, and the outer one moves the beak and tail. Two pinions connected to the bird’s central shaft, a rack lever with a spring and an eccentric cam make the bird move around its own axis.

The pins that emerge from the bird are moved by three cams connected to the birdsong cam follower. The cam follower is the heart of the mechanism as it is responsible for the birdsong, moving the bird and opening and closing the air valve in one “reading”. There must be exact synchronisation between all the components, since every system when in place “reads” this multiple wheel, so that there is no room for the least error in synchronisation or assembly.

During my career I have amassed a a large collection of feathers to be able to restore any type of singing bird box. However, for repairs of this kind, we can only use feathers than can be marketed legally or come from birds that died of natural causes, or from people who raise the birds professionally. Under no circumstances is any bird, large or small, killed to be able to mend these automata.