Repair of a French Royal Exchange 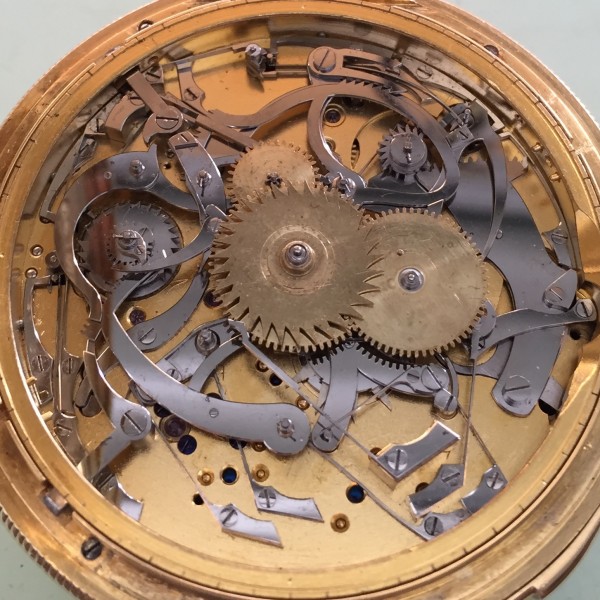 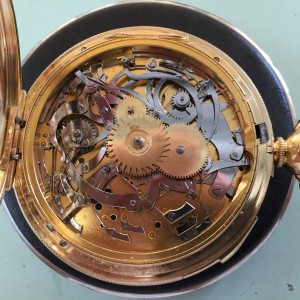 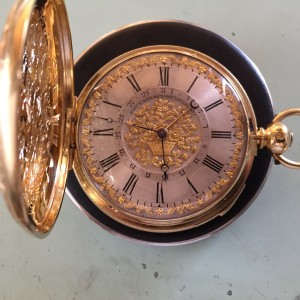 In this article I explain how I examined, disassembled, cleaned and repaired the large and small striking mechanisms, the minute repeater and the duplex calendar escapement of a French Royal Exchange.

My customer in London sent me an e-mail that he had a magnificent French watch with a chiming problem. When I held the watch in my hand, I had never imagined its size, weight, quality and state of preservation. What struck me was its excellent state of preservation; it had really been used very little and seemed to have been checked recently. But I immediately noted the problems with the on-demand minute repeater lever, and the automatic repeater that strikes every 15 minutes with the mechanism and the operation of the watch. The striking mechanism can be of two types, only striking the quarter-hour or both the hour and the quarter-hour. Fortunately the spring and escapement were in perfect condition and and the shaft, spring, escape wheel and roller jewel were original.

After examining the watch for several hours, disassembling it and giving it a first cleaning, checking each component on all sides and for all functions, looking at all the problems with the watch, I decided that the repair had to focus on respect for the watch. I like to respect the original parts in a watch, if I can, but it is not always possible. With a watch like this one, I focus on solving the problem while respecting the original parts.

The problem had been caused by the watch not being handled properly when someone tried to remove the repeater with tension on the mainspring. They had forced one of the levers with a steel wheel when removing the striking mechanism lock, so that a piece was missing, and the wear caused by striking had done the rest. I also saw that a pin was missing from the hours rack, the one that activates the change between the large and small striking mechanisms. Lastly, one lever was not tripping; it was catching when it was released and was not reaching the end of its throw, causing errors.

I started to see some wear and gaps, which made me think about playing with them, to change the height at which the quarter-hour wheel touched the lever, so I did this by making a difference between the two quarter-hour gongs and solved the problem without replacing or touching any original part.

The lever that was not moving properly was the result of wear but it was much more complicated to understand and solve. It is not normal for a spring-tensioned lever not to go to the end of its throw. This lever works in two places: at one end it is lifted by the minute pinion every quarter of an hour and at the other it trips the strike mechanism, but it was not always tripping it and going to the end of its throw. In this system there is a ratchet with a spring that catches or releases the striking mechanism at the right time, but it was constantly getting stuck. It was necessary to polish the scratches off the teeth of the ratchet and adjust the tripping and closing of the striking mechanism properly so that everything would work smoothly again. When the hours wheel pin was replaced, the automatic striking mechanism started to work correctly.

It was also necessary to correct the wear in the centre of the on-demand minute repeater hammers, to properly synchronise the striking mechanism. It was not correctly synchronised so that the end of the minutes rack, the reader that detects if it must strike fourteen or zero, was bent – it is little more than a millimetre long – and it was not finding its position on the minute snail. It was taking a risk to straighten it. If it broke, it would be necessary to attach a new reader, so as not to replace the entire hour snail. I untempered the end, of the reader not the snail, with great care, leaving it flat and in place and polished it so the colour of the untempered steel was not noticeable.

After adjusting the striking mechanisms and solving the problems, making sure that they were working properly, I completely disassembled the watch again for a second cleaning and final adjustment.The watch had been sitting on the bench for several days while I solved the problems but now it was clean again and oiled, ready to be enjoyed by its fortunate owner.

Videos of the repair process