You are here:
08/05/2017Reconstructions, Uncategorized 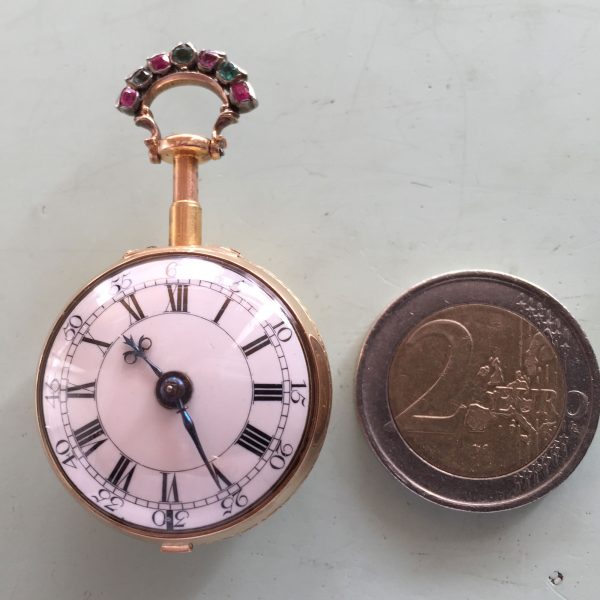 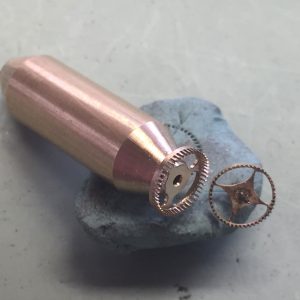 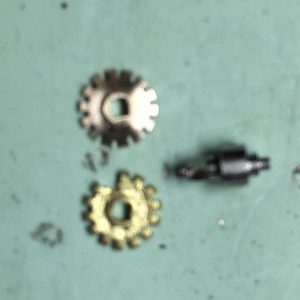 This Higginson pocket watch is one of the smallest 18th century repeaters that I have ever seen or repaired. When the watch came into my hands, it was badly damaged and had a lot of problems. Mishandling in the past had made it impossible for the watch to work.

First of all, it was necessary to redo the ratchet wheel on the barrel as it was worn and one tooth was missing. This part engages with the tension worm screw, which keeps the mainspring tight and allows its tension to be adjusted.

To tackle a restoration job like this one, you have to start with the wheel train, to ensure the gears work smoothly. The crown wheel, which engages with the escape wheel, was also in bad shape: it was stuck, eccentric and twisted. It was impossible for the watch to work in that state.

The second step was to continue with the wheel train, as  the crown wheel was worthless. The wheel has a diameter of 6 mm and 48 teeth. For this type of wheel, I recommend using extra hard or high resistance brass, as the teeth are very small and can twist if the brass alloy is too soft.

After making the wheel, I made a pinion with six leaves and its shank. I adjusted the height of the wheel to engage properly with the escape wheel and the wheel train operated smoothly again. I continued to correct the teeth on the escape wheel so as to make the motion uniform.

The next step was the replace the jewel stones on the balance wheel, as these watches do not take synthetic stones and the jewel stones are made of brass. The one on the upper bridge was loose, had no adjustment and was only held in place by the diamond counterpivot. The jewel stone with the jewel moved in its hole in the bridge and the pivot was too thick for this watch. Two brass bearings were custom-made for the bridges, with 0.10 mm holes, so that they fit into the bridges and were perfectly tight and held in the right place so the balance wheel remained vertical and there was no play in the jewel stones.

I corrected the ratchet wheels of the fusee and the power wheel of the strike mechanism. The chain was changed for one 15 mm thinner, because it was too thick and caught on the grooves in the fusee, stopping the watch. The screws were altered and blued, and the watch was given a complete servicing.

The last problem was the repeater; it did not ever strike the hours correctly and the quarter hours stopped halfway through. The problem was the repeater chain. The length of the chain had been altered, possibly because it had broken. This meant that the pin did not drop into the hour snail properly, so that the hours were read incorrectly. The length of the chain was altered so that it was in the right position for all the hours to be struck correctly.

The watch had recovered its charm and it worked. This is a timepiece that is coveted by collectors due to its age, its complication and its small size. There is great demand for these watches in the Chinese market, where they are exquisite little jewels of good taste.

To make an antique pocket watch that was badly damaged, like this one, to work again is something that gives me great satisfaction. I have been making repairs as complex as this one on an 18th century repeater watch during my entire career.

Restoration and Putting Feathers on a Singing Bird
07/03/2017