You are here:
18/11/2016Reconstructions, Restorations, Uncategorized 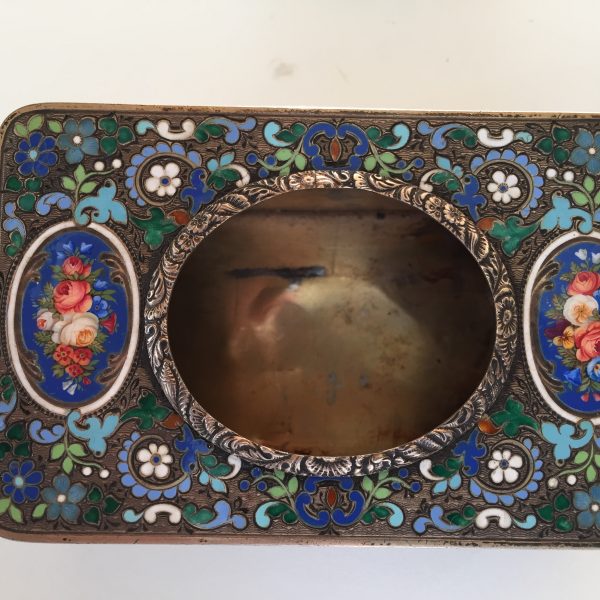 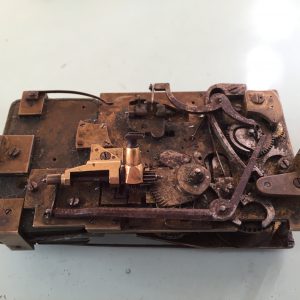 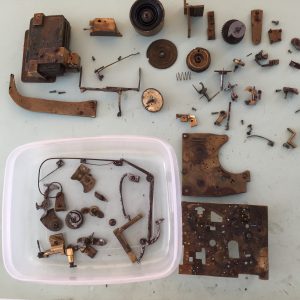 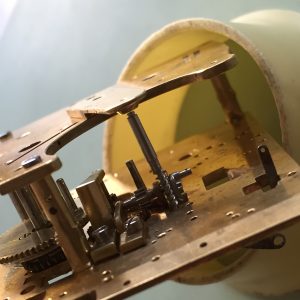 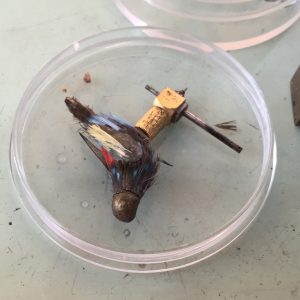 The restoration of this Bruguier box was one of the most complicated and costly restorations of an automaton bird box that I have tackled in my professional career.

I remember the first Bruguier that I worked on over 20 years ago, when I had to reconstruct the bellows and the valves. At that time there was little information available on bird boxes and even less about 6-valve micro bellows. It was a real challenge to get it done.

Today, thanks to my experience with repairing pocket watches and music boxes, working on this type of mechanism feels quite normal.

This restoration took far more effort and dedication than that first Bruguier bird box. The mechanism was practically useless and incomplete, with many parts that were damaged, had been tampered with or were rusty or lost.

First of all, I disassembled and completely cleaned the mechanism. Then I focused on solving the problem of the worm screw: a spiral pinion 1.5 mm in diameter with 12 leaves that regulate the speed as it turns because of the friction of the leaves with the air. It also has a steel part on the shank that blocks the assembly when the mechanism stops singing.

I had to make a number of test parts as there was no sample and also the drive wheel was not in perfect condition.

A 0.25 mm spiral module was the result. The problem with machining this very deep spiral is that no force can be applied when cutting as the steel will break at small diameters, as the thin interior part of the spiral is only 0.30 mm. The solution was to make the beginning of the spiral on the lathe and finish it by hand on the lathe, with aluminium oxide, synthetic ruby and sapphire stones and then temper it and polish it with diamond dust.

The next problem was to repair the bird and make it fit this machinery and then to put feathers on it, as this was not the original bird from the mechanism. The automaton bird that was given to me was from a different, earlier model by Bruguier, although with the same movements, with a turning head, body, beak and tail. The first task was to disassemble the bird, to make the beak out of a tooth.

After finishing the beak, the metal shells for the head and body were mounted. They give the bird its shape and are held on with metal pins. After cutting the pins and making sure that the ends of the pins would not interfere with the operation of the mechanism, all the movements were tested for agility, and it was time to start putting on the feathers.

To place the automaton bird on the mechanism, I used the original lost bird bridge so that it had the same position in the machine, but the diameters of the two parts were different. To solve this problem, I made two sleeves for the bridge support where the shaft of the bird goes, one on the top where it rests and turns the bird, and other underneath where it limits the turning of the pinion and transfers the movement to the bird. Then the bird was fitted to the new support in the same position.

The next step was to fit the three interior needles inside the bird, which move the head, beak and tail, and the wings. These conical needles are different: two of them are hollow and all three are inserted into each other. They are activated by three levers underneath them, which read the singing discs, and a valve.

I had to make several little parts, as well as levers and springs. Fitting the entire thing together was not easy, because, after repairing it, when it was used again, some of the original parts did not work, as they were very rusty and damaged and could not stand the new force so that they broke and had to be replaced. It’s usual for this to happen to mechanisms that are eaten away by corrosion.

The bellows was completely rebuilt using leather. The whistle piston was removed and polished inside. After polishing the steel piston and adjusting the whistle, it was necessary to synchronize the opening and closing of the valves with the song discs, which activate the levers on the valves to produce a song with chirping and trilling. It was also necessary to synchronize the beginning and end of the song with the entire mechanism, to get the song just right.

Once the mechanism had been tested for days and dozens of times, it was disassembled and given a final cleaning, polishing the parts and the screws before finishing it and putting it in the box.

The restoration process took several months, and its reconstruction was made possible by a professional love of this craft and these objects, as financially this type of repair tends not to be very profitable, even though the value of the items is high. It’s just not possible to stop working on this type of job. When the workday ends in the workshop, it’s very difficult to get it out of your head, especially when things are not going well, and time passes. You know when you’re going to start the job, but not when it will be finished.

Restoration and Putting Feathers on a Singing Bird
07/03/2017