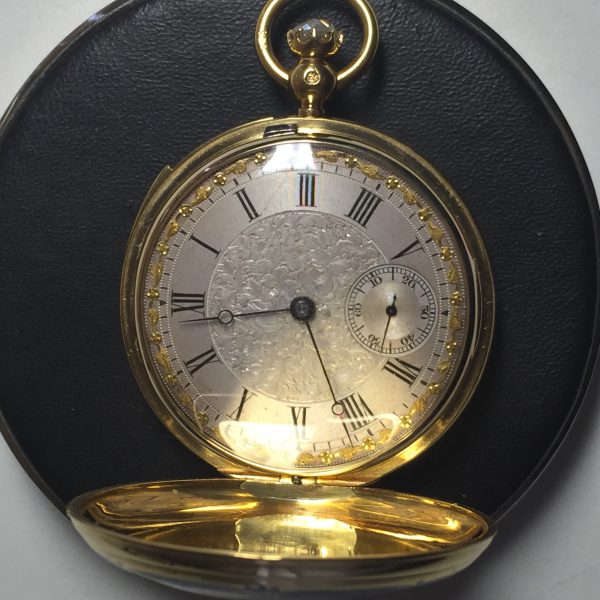 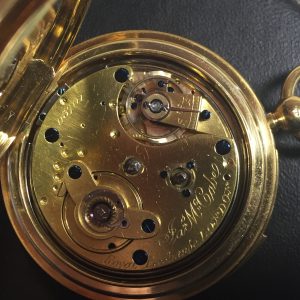 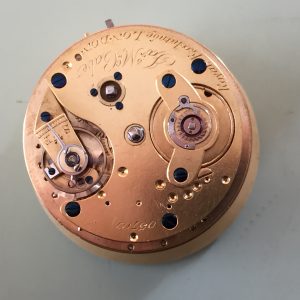 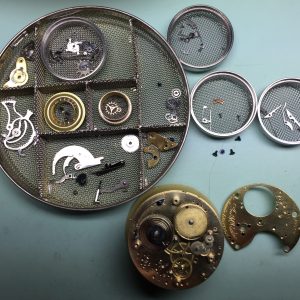 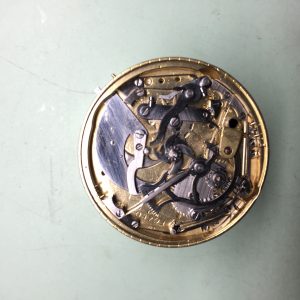 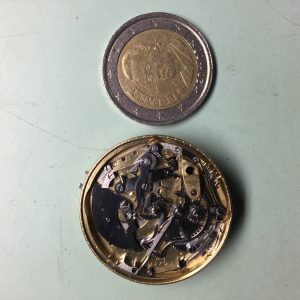 In this post I describe the restoration of a beautiful “James McCabe” duplex escapement minute repeater pocket watch.

The watch came to me in very poor condition. The watch had completely seized up due to humidity and rust. The repeater did not work for the quarter hours or the minutes. It only struck the hours, and not correctly. The entire repeater was seized up; the quarter hour and minute pins and the minute teeth and hammer were completely jammed. Also, old green-coloured oil and rust had formed an abrasive paste that was very dangerous for this delicate little watch.

On seeing the condition of this little jewel, I took off the face and put the entire watch to soak in toluene for 24 hours to soften this paste so that I could disassemble the watch without a risk of breaking anything. It was not at all easy but all the parts came out without any of them breaking. I took off the balance wheel and duplex escapement, very carefully removed the repeater, as the parts would not come off easily, and finally I tackled the movement and repeater wheel train plate.

After disassembling this magnificent pocket watch, I could see that the mechanism had a number of problems. The tips of the duplex escape wheel teeth were slightly worn, so they needed to be corrected and sharpened, and I adjusted the impulse. The taper pin (also called the set hands arbour, which is the rod with the square that transmits the movement to the hands) was not the original one and did not perform its function of moving the hands. Also, the steel washer under the hour setting square was missing. I replaced the taper pin and put on the missing washer.

In addition, the repeater was striking very slowly and although it was only striking the hours, there was a difference of several seconds between the strokes. Also, it could not be regulated, so it either worked very quickly or very slowly. The problem lay in the last pinion of the repeater. This watch has a teardrop-shaped weight on the pinion so that if the speed regulator moves too far, it touches the plate and does not stop the pivot of the pinion.

I corrected this by making a suitable weight, so that the striking mechanism would operate at the correct speed and its speed could be regulated.

Then I completely disassembled the watch, cleaned it and removed the rust. I had to polish several components that had rusted, mainly on the spindles of the parts, so that all the parts of the repeater worked smoothly again. I adjusted the speed of the repeater with the new weight on the pinion, and the hours, quarters and minutes worked correctly.

The next thing I did was to put on a suitable set of fine Breguet hands as the watch had some art deco cathedral style hands, which did not look right on this watch and did not belong to the era in which it was made. I took off the interior springs of the case and the striking mechanism slide to polish them and clean off the rust.

With this McCabe watch finished and working, it is a beauty. The case, made by AS Alfred Stram, is of very high quality, with enamel and precious stones. This case maker was one of the best, if not the best, of his era. His cases are associated with high-quality watches and some very famous brands of the time.

The repair was not excessively complicated but it was very delicate due to the small size of the watch and the seizing up of the parts. It took great patience not to break anything and to remove all the rust and polish the parts.